Newsmaker of the Week // Bruce Rogers

When Forrest Rogers and his son Bruce built Grandview Speedway and opened it in 1963, it is hard to imagine they envisioned the success that followed.

At the center of it all was Bruce, a hard working, plain-spoken family man, whose life was wholly dedicated to the track.

In latter years, he delegated some of his responsibilities of running the track, but never expected anyone to do anything that he wasn’t prepared to and capable of doing himself.

Bruce Rogers died last week, a little over a year after he was seriously injured an a car accident, from which he never fully recovered.

In typical Rogers family fashion, the practice session at Grandview last Saturday went on as scheduled.

Though Bruce Rogers’ death is a Newsmaking event, in triuth, Bruce made news, quietly, effectively, and consistently, by owning and operating a race track that has withstood the test of time and is the envy of many in the racing business. 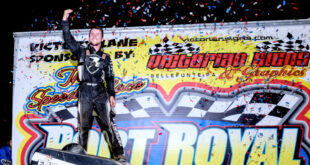 Newsmaker of the Week // Logan Seavy

Newsmaker of the Week // Jonathan Davenport

Newsmaker of the Week // Danny Dietrich